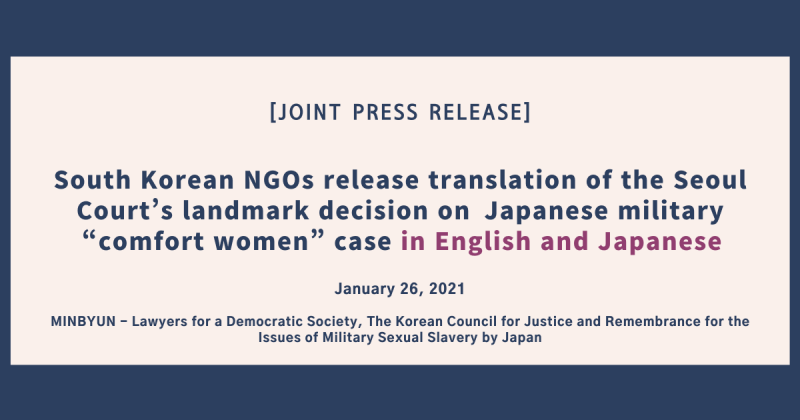 * English translation of the decision updated as of 23 February 2021

Seoul (26 January 2021) – South Korean NGOs – The Korean Council for Justice and Remembrance for the Issues of Military Sexual Slavery by Japan, MINBYUN – Lawyers for a Democratic Society – jointly released today the Seoul Central District Court’s recent historic ruling finding that Japan should compensate the victim-survivors of the Japanese military sexual slavery (“comfort women”) during the Second World War translated in English and Japanese. It is the first judgment from a court of any jurisdiction that found Japan legally responsible for the victims of wartime sexual slavery. The Seoul Court’s decision was delivered on January 8, 2021, and became final on January 23, 2021, with no appeal from Japan, the Defendant.

The Court ruled that state immunity cannot be applied to this case in which crimes against humanity were committed systematically and extensively by Imperial Japan. The Court also emphasized the evolutive nature of the doctrine of state immunity and that exempting Japan who destroyed universal values of international community and inflicted severe damages to the “comfort women” victims from this jurisdiction, which was chosen as a forum of last resort, would deprive victims of their right to access to courts and remedy for their rights.

The decision holds significance for the victim-survivors of the Japanese military “comfort women” as their fight for the rights and reparations against the perpetrator state of Japan were finally recognized in legal terms. It builds on the legacy of the continued fight and solidarity of victims-survivors, human rights activists and scholars around the world who have tirelessly worked on and challenged the conventional norms on the issue of wartime sexual violence, peace and security.

“By acknowledging that the former comfort women have the right to a trial, this ruling grants them their full citizenship. The court has created a shelter for the victims and promised to protect them,” said Lee Sang-hui, an attorney with MINBYUN – Lawyers for a Democratic Society who have long been working on the issue of the Japanese military “comfort women.”

“I hope the Seoul Court’s decision which brought the principle of respecting human rights and victim-centered approach under the international human rights law could shed light on the Japanese military “comfort women” victim-survivors and their bereaved families as well as all wartime sexual violence victims in Asia and around the world on their journey to justice,” Lee added.

The Korean Council for Justice and Remembrance for the Issues of Military Sexual Slavery by Japan, with victim-support organizations in Korea, announced a co-statement on January 8 to celebrate the ruling that “has opened a new horizon for human rights protection.” These organizations are campaigning for a statement to demand the Korean government to practice active diplomacy towards Japan, endorsed by about 100 organizations from Korea and around the world.

During the 1474th Wednesday Demonstration, Lee Na-Young, Chair of Board at the Korean Council emphasized that “this ruling reminded us the truth that state immunity can be rejected and that universal human rights take precedence over agreements between countries in cases of major violations of the International Human Rights Law and the International Humanitarian Law.” She further commented that this ruling is “a significant achievement for the 30-year-movement for resolution of the Japanese military sexual slavery (“comfort women”) issue that has stood in solidarity with victim-survivors.”

The term ‘comfort women’ refers to hundreds of thousands of girls and women from several Asian countries abducted and forced into sexual slavery prior and during World War II by the Imperial Japan’s military.

The issue of Japanese military “comfort women” remained silenced until the 1990s when “comfort women” victim-survivors came forward and demanded Japan’s apology and reparations. Despite Japan’s official recognition of its operation of the “comfort women” system through its Chief Cabinet Secretary’s statement in 1993, reparations or official apologies were not made for individual victims.

The victim-survivors of this case filed the lawsuit to the Seoul Central District Court in January 2016 seeking a legal remedy as a forum of last resort, after failures challenging the State of Japan at courts in Japan and the U.S.

The Korean Council for Justice and Remembrance for the Issues of Military Sexual Slavery by Japan, e: info@womenandwar.net